I've got a Sapphire Radeon HD6850 graphics card where the cooling fan was dying. It did no longer cool properly and at the same time caused extensive vibrations and noise. With that fan, under load the card immediately reached out for temperatures above 100 °C. I did not want that to happen and so I decided to replace the fan, which turned out to be not as easy as I would have guessed. 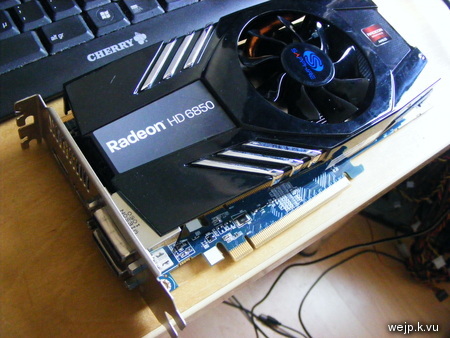 The problem with this card is, that you cannot remove the plastic cover surrounding the fan without first removing the whole heatsink. I have taken a few photos to document the process. Unfortunately I did not take a picture at every step, but I'll describe what I have done. 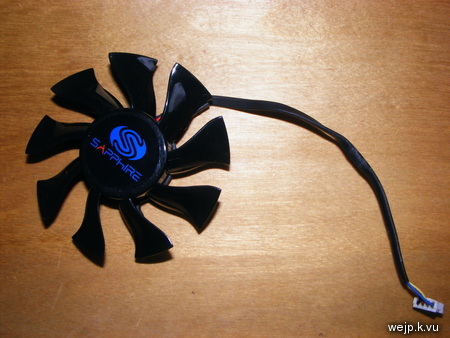 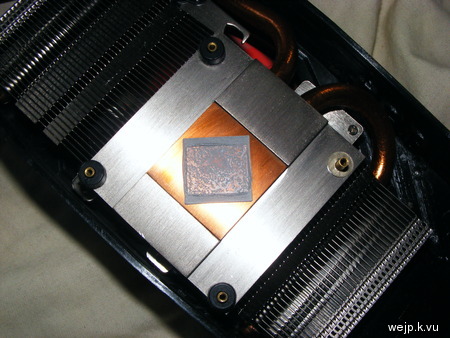 After removing the heatsink I first cleaned the bottom of the heatsink and the GPU to be able to later apply a thin layer of thermal grease onto the cleaned GPU die and then reinstall the heatsink.

This is what the card looks like without the heatsink... 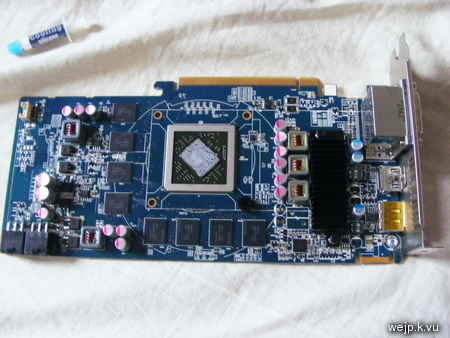 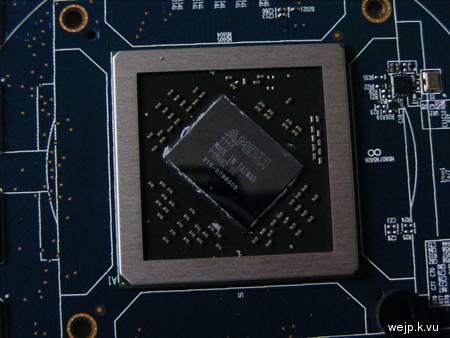 ...and this is what the card looks like with the heatsink reinstalled, but without its plastic cover. 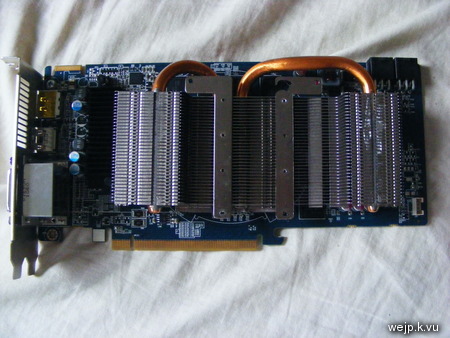 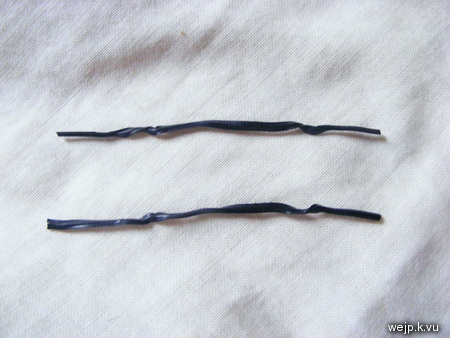 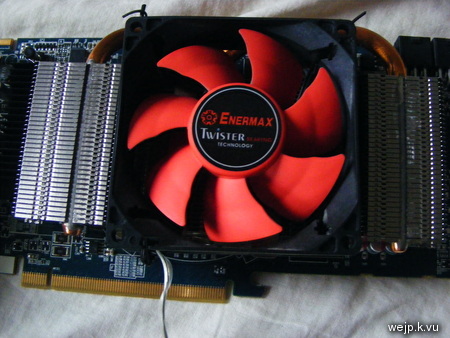 As the new fan's dimensions are somewhat bigger than those of the old fan, the plastic cover does not fit onto the card anymore and the card is a little thicker than before. The good thing is, with the new fan the card is pretty silent, especially compared to how loud the broken fan was before and the temperature stays well below those dangerous temperatures measured with the broken fan. 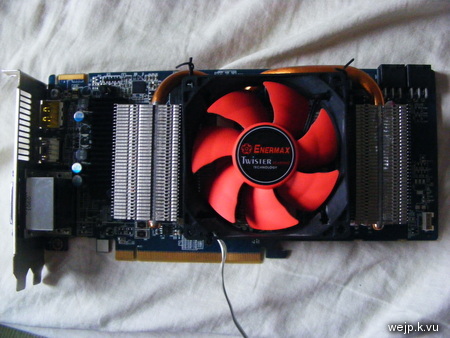 One note for those of you, who might want to try that with another graphics card model: In my case I have connected the new fan to the mainboard just as one would do with a case fan, which means there is no fan connected to the graphics card fan connector. This works fine with my card (Sapphire Radeon HD 6850), but other cards might either refuse to work if there is no working fan attached or only run on the lowest possible clock settings. You should probably check that before disassembling the whole card. ;)

dario (web) says:
2011-11-08 08:37:01
hi void, does that card adjust speed by voltage or by PWM?
you should be able to just plug it in the orignal socket without problems. given it regulates by voltage.
if it works by PWM then the curve could be pre calibrated to compensate the fan's inductance/capasitance (the later is the most probable) which would make the fan go too slow or to fast (respectively) if it has more of one of those properties
(they are oposite, if you add capasitance to and inductive load u end up with a neutral load, and viceversa)

Further more, the motherboard doesn't know about the gpu's temp so if it goes hot it won't speed the fan up, so it could overheat. So beter leave it at maximum or regulate it at the minimum that would keed the temp in a good range when under maximum load, like running furmark.
dario (web) says:
2011-11-08 08:57:35
oh i forgot, the "dying" fan most probably isn't dying, it just got dirt inside and the grease got dry and sandy.
do as i do whenever that happens. Disamble the fan, remove the stickes, carefully remove the retentions, and becareful because they can jump of when being removed, DONT lose them (happened a lot of times.)
leave everything in hot water with detergent (put detergent until the liquid feels slipery, (it shouldn't be that much) for some time for it to be able ti penetrate the grease and then with a tooth brush wash everithing, and remove all the grease it could have, Be carefull not to damage the circuits with the toothbrush.
Buy a litle chain oil, one not to heavy as it would slow the fan, and not to light as DW40 as it wouldn't lubricate well enought, the density is just a little more that the kitchen oil.
Put a drop in the sleeve and then put the fan if the shaft's still not fully covered add another drop. (not to much as it would spill when spining)
put everything back together and if the sticker in the back doesnt adhere anymore clean the area well and use some common tape, and use something to make preassure to fully stick the tape to the plastic so the oil wont get under the tape and detach it.

oh and the fan's female plug for the fan can be bought at an electronics store if you continue using the red fan, buy the plug, the female "pins" and bind it with a plier
wej (web) says:
2011-11-08 13:02:58
dario: Thanks for your comments.
The card controls the fan through PWM and uses a connector with four wires for that. My case fan comes with three wires only, so there is no dedicated pwm control wire there, which is why I can't easily connect it to the card. You are right that the mainboard does not know about the card, but that does not really matter as I run the fan at full speed all the time anyway (and even though it runs at full speed, it is pretty silent). That way, under load the card's temperature does not go above 80 °C which is well within the aceptable temperature range for that GPU. When lowering the GPU's load voltage to 1.050 V I was able to reduce the temperature by several more degrees. Going below that voltage caused the card to show artifacts and occasionally even lockup.

As I still have the broken fan, I might try your suggestion. There is not much to lose anyway, so it might be worth a try. It doesn't look like there is any dirt in the fan, though. The card has been running in a air conditioned data center until the fan broke, so there wasn't much dust for the fan to collect. :)
dario (web) says:
2011-11-08 18:14:20
when i said PWM i thought it was pwm'd in the power line itself.
If it uses the 4th wiere for pwm, you could translate it to the fan's power line with 3 bipolar npn transistor and 2 resistor, if you're intrested

how wierd for a fan to die if not from dust....most of the times, if not all, the device dies way before the fan even starts thinking about it.

The only fan of mine that didn't die of dust was a cheap chinese 12cm one that got dust inside and the sleeve wore out and it started to vibrate (with only 2 months of use). Did what i told you above and used a heavier oil to compensate the loosyness and damper (if that's the word) the shaft. It's been working flawlessly for more than 2 years without a single problem.
ian (web) says:
2011-12-14 23:16:28
An answer relevant to my own problem, and does not require and serious thread necromancy on my own part!

First, wejp I've been having the exact same problem as you and the exact same card (well a Sapphire HD6850 which matches your picture, I'm not sure how many models they make). What exactly did you do in the end to solve the problem?

Could either of you point me to something w/ more detailed instruction for dissembling and cleaning a gpu fan. I'm a little nervous, I don't really have the money to replace the card if I do something wrong.

Thanks for any help you can give me.
wej (web) says:
2011-12-15 14:24:53
ian: Although I had another look at the original fan (after dario suggested trying to fix that fan), I did not fix that one but stuck with my solution you can see in the pictures (which works fine by the way). The reason for not fixing the fan is, that it is really hard to disassemble the fan at all, without damaging it. And even if I would be able to fix it, I would assume that it would break again sooner or later. The fan really looks like it is one of the cheapest fans available. The case fan I am using is of a much better quality.

The only disadvantage with my solution is that you lose the PCI slot below the card as it makes the card a little thicker. As I do not use that slot anyway, it is not much of a problem for me.

If you would like to connect your fan to the card instead of connecting it to the power supply or mainboard, you would have to use a transistor like dario suggested, as the card uses a four pin fan connector where one additional fan delivers the PWM signal, but that signal's not able to power the fan directly.
As for the calibration issue dario mentioned a few posts above, I would guess that this really is not much of a problem as the fan control electronics should just control its PWM cycle in response to the RPM measured through the fan's rpm output wire.
I did not bother with all that, and just run the fan at full speed connected to my mainboard. The fan I am using is pretty silent even at full speed.
ronal (web) says:
2012-04-03 18:33:18
Thanks to WEJP. I finally have the courage to open my HIS 6850. The card is very similar to WEJP's saphire, the only difference is the plastic cover snapped-on the fin. I remove the plastic cover and the fan and replace it with a good 80mm fan.

Thanks to Dario, for good insights i have not known before.

TIP : Did you guys know that the latest version of Speedfan can do cross TEMP/PWM control ? For example, you can use GPU Temp to adjust PWM on the motherboard :D

Milos (web) says:
2013-09-17 06:55:06
Thanks very much for this tutorial, managed to fix my Sapphire Radeon HD 6850 with the help of it. I didn't use a case fan, but had an old Gigabyte 8800GTS card that died about a year ago and found that it had the same 4-pin connector for the fan. So I removed it from the old card and placed it onto the Radeon without removing the heatsink. At first I thought that the three screws would fit perfectly, but it turned out that they are on different positions. So I screwed it on with one of them and used a wire to fix the fan to the heatsink in a similar way to the one in this tutorial. Here is a picture of the end result https://dl.dropboxusercontent.com/u/36075084/20130916_233319.jpg

The only drawback is that this fan is of different configuration, so the temperature goes upto 85 C, but again that is much better than 105-106 that was with a malfunctioning fan. The new fan also has PWM so it is very quiet when idle. And it also creates less noise on full load than the original one.

I also bought a case fan, just in case, and found a "slim" variant that is only 15mm in height (usually they are 25mm), so that will be my alternative solution if this fan also dies.
asanka (web) says:
2013-10-30 09:45:13
dear friend,,
i have also this graphic card,,,with damage some resisters and caps can u give me its diagrams for to repair this...thanks a lot.....pls send me with full hd pictures with ur graphic card pls...


tushar (web) says:
2014-09-27 02:24:55
same thing happened with my sapphire hd6850 , going to replace fan asap
Alvin B. (web) says:
2016-01-17 10:12:45
My 6850 fan died long ago and I basically did the same as you. I actually went through the trouble of finding and ordering the correct replacement fan - only to find that the shipper simply stuck it in a bubble wrap envelope and the fan arrived damaged - out of balance as soon as it turned on. So I just left my video card with the wired on 80mm fan and it's been running now for years this way.