gDMM is a GTK+2 based application for Linux (and most likely other POSIX-compliant operating systems) which reads data from a Digital Multimeter (Metex/Voltcraft or compatible, e.g. M-3640D, M-3650D, M-3850D) through the serial interface (RS-232) and draws a graph out of this data. Measurements can also be saved to/loaded from disk. 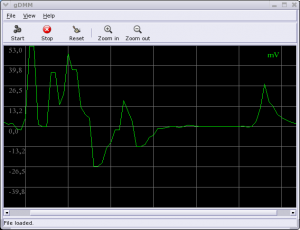 This programm is free software released under the terms of the GPLv2 (GNU General Public License Version 2). I have written this program in C. First version (0.1.0) released in December 2003. The current version is 0.1.2.