In many ways the Dingoo A330 is very similar to the Dingoo A320. Still, one cannot call it the successor of the A320 as it is made by a different company. The A320 has been made by Dingoo Digital, while the A330 is made by Dingoo Technology. To make things even more complicated, Dingoo Technology is run partly by people previously working for Dingoo Digital. At least that is what I've read about these companies. Dingoo Digital even claim on their website that the A330 is a fake.

The A330 came in a nice white box with colorful images of the device on it. 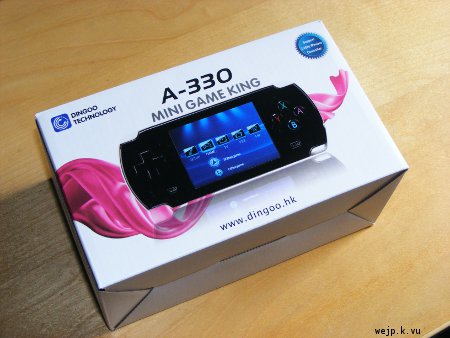 Besides the A330 the package includes some accessories: A power adaptor with a USB port, a manual, an USB cable, a video/audio cable and a pair of headphones. All these accessories are almost identical to those that came with the A320. 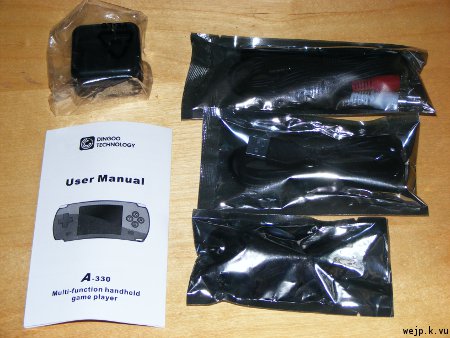 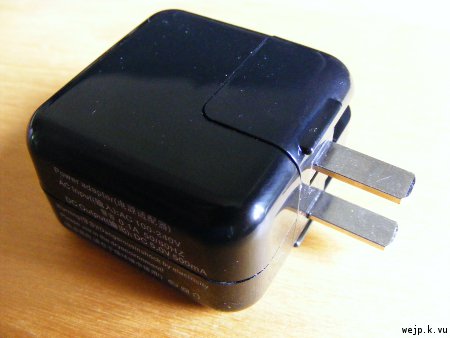 The A330 supports a wireless controller which can be bought separately. I have also got such a controller, which came with a manual too. The manual of the controller is written in such a bad English that it is almost impossible to understand anything. Luckily it isn't very difficult to use the controller. I'll get to it a little later in this review. 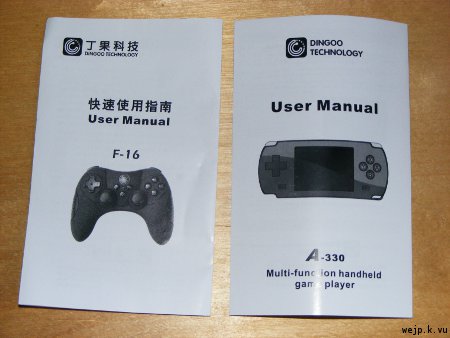 This is what the A330 looks like. Some people say it somewhat resembles the appearance of the PSP. While this it true to some extent, it is still way more similar to the A320 than to the PSP. 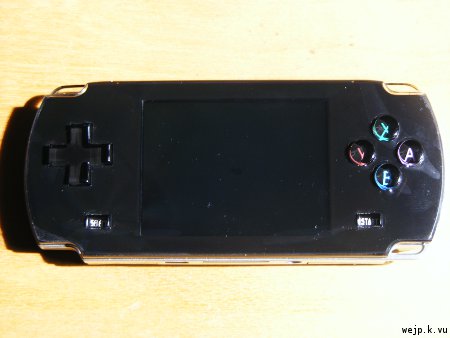 As you can see both devices have almost exactly the same dimensions, the A330 being a little wider due to its rounded appearance. All buttons and connectors are located at the very same positions. 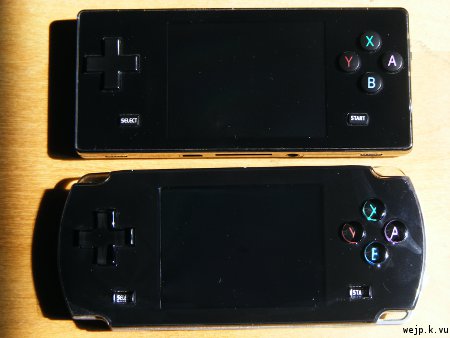 When comparing the displays of both devices, the A330 is noticably brighter than that of the A320, which is a good thing. Also the viewing angles are better than those of the A320 display. Please note that the bright spots at the top of the A330 screen do not result from the display backlight but are part of the menu theme, which is a little different than the A320 theme. 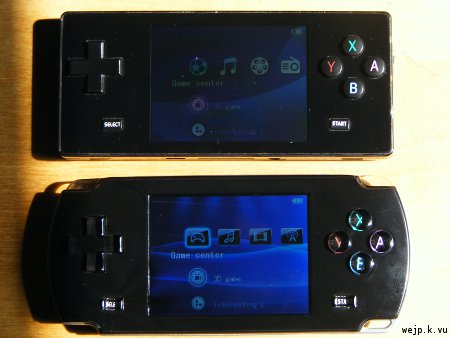 Especially when looking on the screens from the left or right you'll notice a difference in viewing angles. Unfortunately the A330 still uses a display which was meant to be used in a vertical orientation. This is less noticable than on the A320, but it is still visible. 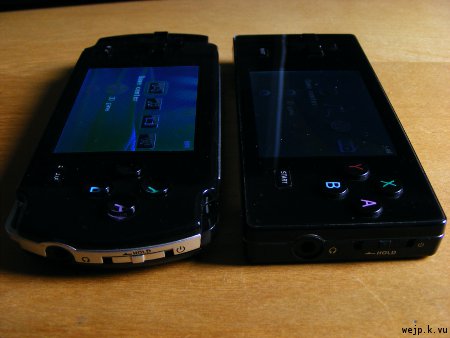 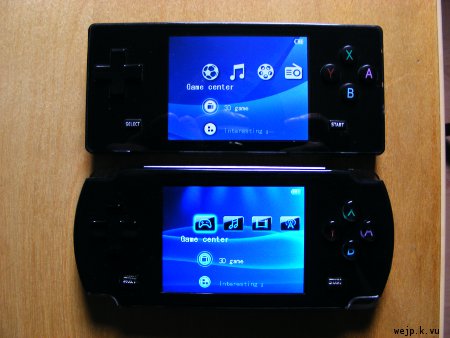 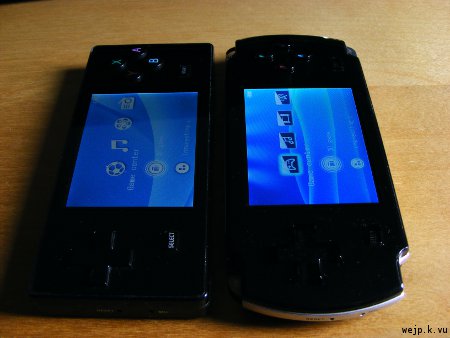 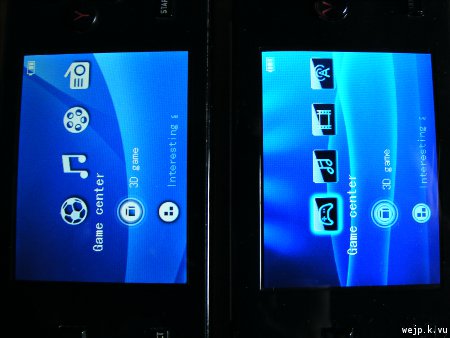 The A330's buttons and the d-pad are made of clear plastic with the painting applied at the back of the buttons. The shoulder buttons are bigger than those of the A320. Internally they still seem to use the same switches. 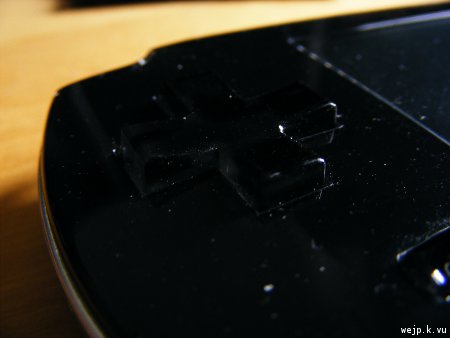 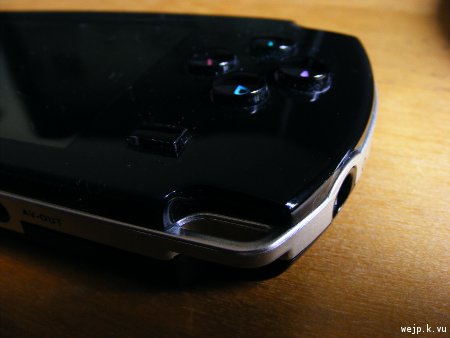 The speakers have been moved to the back of the device. While at a first glance it seems that there are a lot of holes for the speakers, this is not the case. Only 14 of what seems to be holes are actual holes for each speaker. This is not a problem though. The sound of the speakers is a little better than that of the A320. Don't expect a huge difference though. Depending on how you handle the device it might be a little inconvenient to have the speakers at the bottom, as you might close the holes with your fingers, so the sound becomes somewhat muffled. To me this did not happen that easily though. 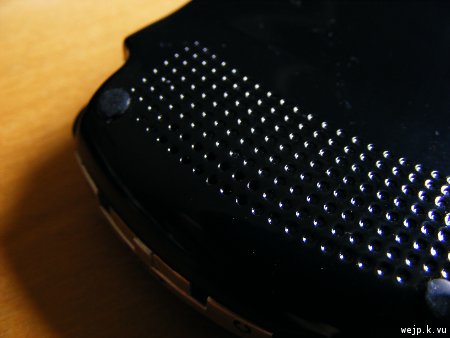 When looking at the back of the device you'll notice the company's logo, which is quite different from the paw logo of Dingoo Digital. 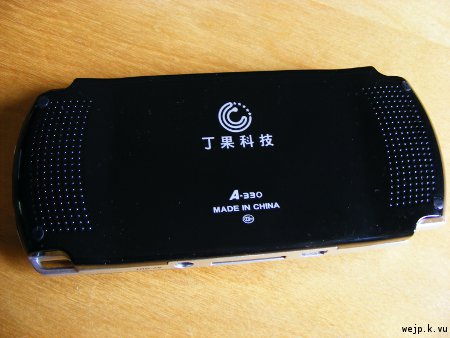 Although there are a few improvements over the A320, the differences are rather small. This might be disappointing to some, but actually has one positive side: Dingux works out of the box on the A330, thanks to its almost identical design. That also means you should be able to use the Gmu music player with the A330. :D There are two major changes though. One of them is the support for the wireless controller, about which I'll tell you a few things in the next paragraph. The second is the increased RAM size. The A330 features 64 MB of RAM, while the A320 came with 32 MB only. This can become quite useful especially with Dingux.

Before having a look at the wireless controller, let's see how the TV output works. Dingoo Technology has claimed the TV out features DVD quality. When connecting the A330 to my computer monitor (through a composite/s-video to VGA box), I was rather disappointed about the result. The image quality is very similar to that of the A320. It looks like the resolution is 320x240 like that of the internal screen. While such a resolution is fine for a small internal screen, it looks pretty blurred on a larger screen. I haven't checked if the resolution is increased when playing higher resolution video files. If this is the case, I'll let you know. 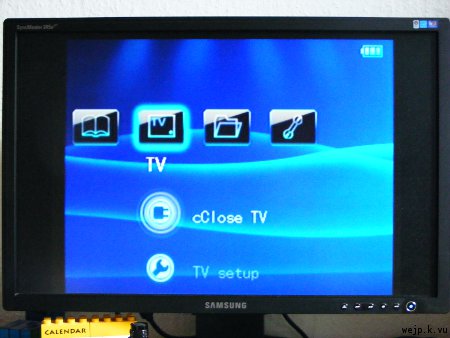 While the TV out is not really impressive, it is still usable and it is especially interesting when used in combination with the new wireless controller.

This is what the controller looks like. It looks somewhat similar to controllers of some popular gaming console. ;) While the controller is communicating with the A330 through the 2.4 GHz ISM band, it is not using bluetooth for its connection, but rather a proprietary protocol. 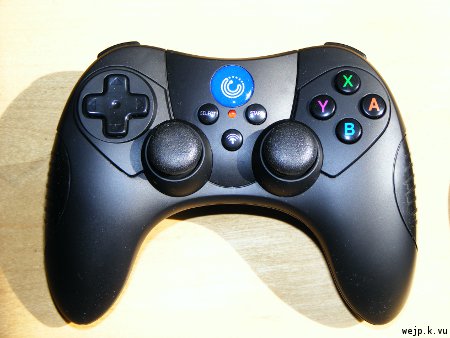 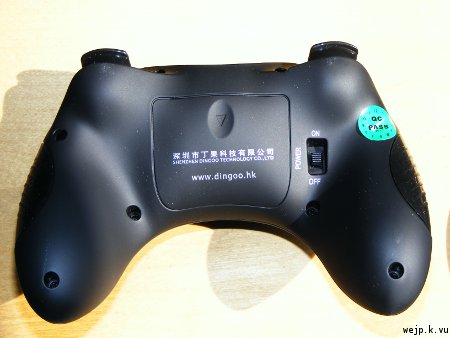 Except the multiplayer issue it is quite enjoyable to use the wireless controller to play on a larger screen.