2009-07-22 05:23
A new Dingux version has been released, which comes with a new rootfs. An EXT3 partition on the SD card is no longer needed. Actually EXT3 support has been dropped from the Dingux kernel in favor of FAT to make installing Dingux from Windows easier and reduce the kernel size. Due to other changes dynamically linked programs need to be recompiled for this Dingux version. Here is a new Gmu release which is compatible with the latest Dingux release. 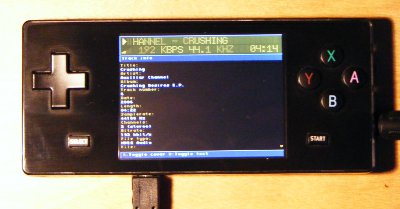 To run Gmu extract the zip file to your SD card and execute gmu.goo in the Gmu directory.

How can i desativate the speaker’s sound?

The player is amazing and the readme really helped to understand controls.

I only have one problem with the player: I can’t lock controls, so having the dingoo in the pocket while using gmu results in unpredictable behaviour.
wejp (web) says:
2009-08-03 12:04:00
There is a hold function available in Gmu, which you can enable by pressing SELECT + Up (when using the default keymap). This disables all buttons and turns off the backlight until you press SELECT + Up again.
lord bla (web) says:
2009-08-04 17:03:00
thx! That makes dingoo + gmu the by far best mp3-player I’ve ever owned