I, on the contrary, find them pretty annoying. Am I alone here? Do people actually like them?
Super-bright blue LEDs as power indicators are not cool (and although a little less annoying, neither are super-bright white LEDs or any other color for that matter). Power indicators are not supposed to illuminate the whole room with a pale blue shine. They are supposed to indicate the device's operating status in the least annoying way possible. That's where their purpose begins and ends.

With the blue power indicator of my computer starting to get on my nerves, I decided to replace that LED spotlight with an ordinary green LED, and while I was at it I also replaced the way-too-bright red harddisk LED with a standard red LED.

Here are a few pictures of my modification. The image above shows the power indicator before and after the modification. Actually, the difference in brightness is even bigger than what the image suggests.

The computer's case is a cheap noname mini ITX case, but many other cases are built in a similar way. 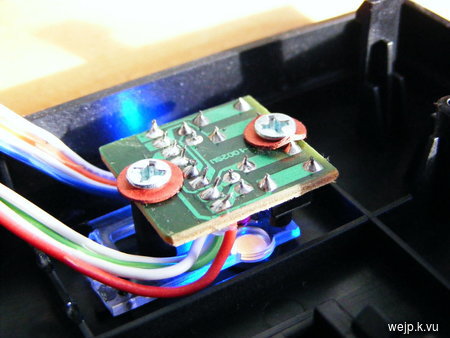 The case is made of metal with a plastic front. The plastic front has four little clips on the back which are used to attach it to the metal case. By bending those four clips a little, one can remove the front and expose the PCB with the LEDs.

The power and harddisk LEDs are on a small PCB connected to the plastic front with two screws. 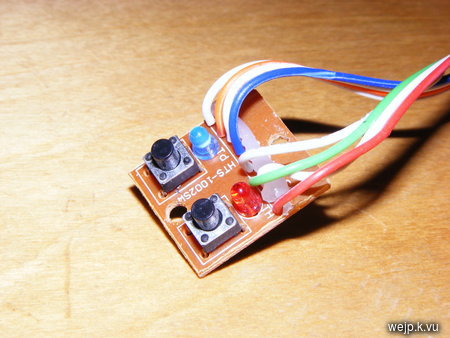 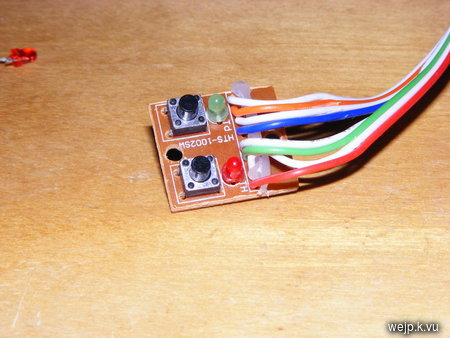 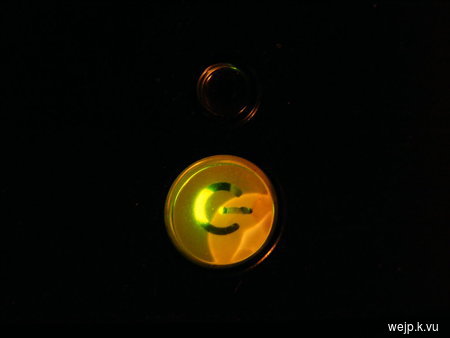 All in all, the whole modification was rather trivial, but it was well worth it. Of course, this mod should not have been necessary in the first place, but that's why I wrote this article.

deeice (web) says:
2012-10-16 02:44:07
You're not alone. I've been known to rant about the blue ones myself. http://macrofig.blogspot.com/2012/07/blinky-lights.html Unfortunately my limited hardware skills limit my LED mods to something like masking tape. I can't wait for blue to go out of fashion so I can sleep at night without unplugging everything.
Benjamin (web) says:
2012-10-20 20:33:01
My solution to the too bright blue power LED: Unplug the power LED and just use the red HDD LED as indicator for a working system.
asdf (web) says:
2012-11-10 02:45:15
Although I'm not a hardware hacker, the first thing I usually do when I receive a new piece of electronics equipment is crack it open and disconnect and/or smash all of the LEDs (ok, sometimes I try the /sys interface if it's available first). I hate them all, blue ones included.