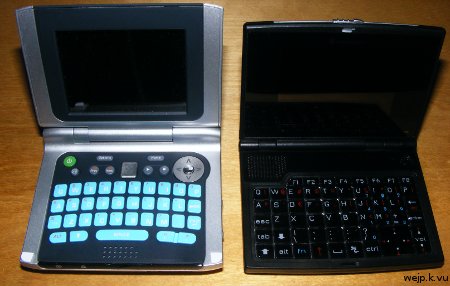 The machines have both a very similar shape and size and their specifications are also not too different. While the Ben NanoNote was meant to be Open Source hardware the Zipit Z2 was built as an instant messaging device for teenagers and was then repurposed by the hacker/free software community as a more or less general purpose Linux computer.
Both devices come with 32 MB of RAM and a 320x240 color screen (LCD) with an identical size. While the NanoNote uses a 336 MHz MIPS-compatible SoC (Ingenic JZ4720), the Z2 uses an 312 MHz ARM9 SoC (Marvell PXA270).

Apart from its Micro SD card slot and three test points that expose a serial port under the battery, the NanoNote lacks any kind of connectivity. The Z2 on the other hand comes with internal WiFi and a somewhat obscure extension port on the back that exposes USB host and some other things.

Even though the Nanonote does not come with many interfaces to the outside world, members of the community still try to build hardware for the NanoNote. One pretty impressive little extension is the UBB-VGA that uses the micro sd slot to output a high resolution VGA signal.

sucotronic (web) says:
2011-09-26 16:12:06
You forgot to mention that the Nanonote is yet in production, but not the Zipit. Not to mention that for Nanonote is available all kind of dock, so you can open it and route the two serial ports (not only the one available in the battery hole) to a external connector. Indeed, you can also enable the usb host module in the linux kernel and try to make it work with some custom electronics :P
wej (web) says:
2011-09-26 16:23:46
sucotronic: Indeed, the Ben NanoNote is still available, while the Z2 is not being manufactured anymore.
Unfortunately the USB host 'pins' of the JZ4720 have not been routed to the outside, so there is no way of using USB host on the NanoNote.
Maybe one can bit-bang USB-host low-speed over the sd card slot. ;)
frankiejay (web) says:
2011-09-28 04:28:50
Awesome.This clears up what I wanted to know.
Also, those tabs on the zipit; are those to prevent the dreaded accidental powercycling that happens when the zipit finds itself in ones pocket? That's clever. Is that foam tape?
wej (web) says:
2011-09-28 08:31:21
Yeah, those tabs are to prevent accidental powercycling (and accidental button pressing in general). I took those pieces from an old credit card and then glued them with double-sided tape on the Z2.
Slaanesh (web) says:
2015-11-30 23:07:11
You seem to have missed that the Ben Nanonote does come with a mini-USB thus easily enabling USB networking.
wej (web) says:
2015-12-02 20:37:35
Slaanesh: I know that USB networking is possible, but if you have a computer around where you connect that USB port to, why bother with networking on the Nanonote at all? You could simply use the other computer instead, which would probably be much more convenient anyway. The USB port on the Nanonote does not even support host mode, so its use is severely limited. With the Z2 you do not have those limitations. It works without the help of another computer with USB host.